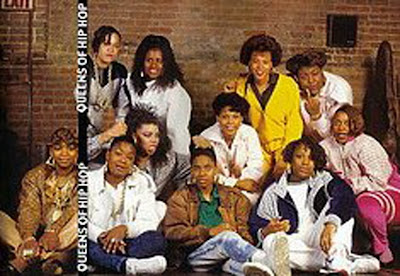 I just wanted to announce the arrival of (or actually just my arrival to) the Sexy But Deadly blog. Its a Female MC sharity blog that posts women rap full-lengths indiscriminate of coast, country, style or scene.

I haven't yet "used" this site, so no testament to the quality, but I'm glad to see someone doing it and at least some of the kinds of things I hope would be there are there. Kind of seems like an aggregate link-list blog but in an exponential mess I appreciate a little bit of organizing.

Red side, Rum side 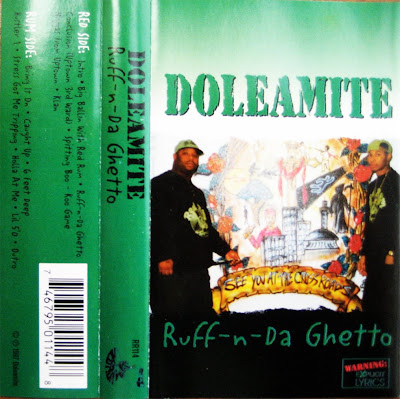 Weird full-length by bounce eccentric Doleamite. I like the cover - posing with the Mortality/American History themed funeral folk art. Reminds me of this tape. Exaggerated soulful singing kind of like the Souljas of Sorrow or that Death full-length. Even stranger is this different-key a cappella Frankie Beverly sample on "Stress Got Me Tripping". 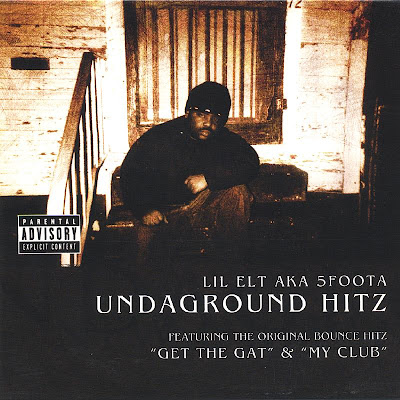 Lil Elt of "Get the Gat" fame and this disc features two versions of that track that differ from the "gemix" version: the original and the slowed-down 10 year anniversary revisit. Both are good and there's plenty of other worthwhile shit before them. I recommend "Bootin Up".

A greatest hits cd presupposes an existing body of releases. Anyone know those releases? And the related question for Noz: How many Parkway Pumpin cat. #'s are in your head or are you fronting?

I have this one in a vinyl-style blank-spine sleeve. Whenever I buy used promos I wonder what radio station or magazine they were mistakenly sent to.

One Man Gang - One Stop Shopping 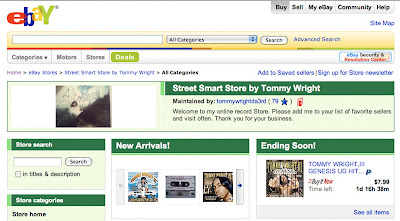 The cost is still on the high side but its still worlds away from the obscene net deals I've seen the past couple of years. I bought "On the Run" from an Amazon seller 5 years ago for 8 dollars. I saw it offered last year on the same site for 300, and though maybe no one ended up paying that much I saw it go for at least 100 on Ebay.

Hit it up and realize I'll be pulling all TW3 links ASAP. And look forward to an interview with Tommy by T&G poster Rob in these pages if it turns out he's serious. 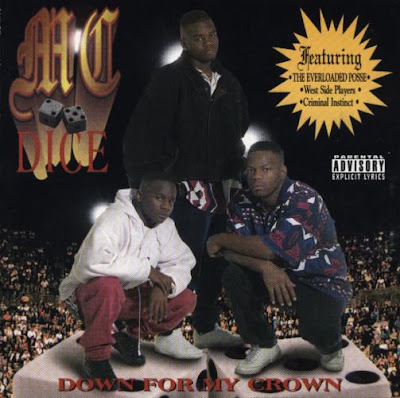 I recently read Luke Rhinehart's the Diceman, which is a book about a psychologist who one day rolls a dice to decide whether or not to rape his neighbor and colleagues' wife. The dice tell him to go ahead with it and it works out so well he converts thousands of followers across the nation who all let chance take over their lives.

This might not be too far off from what Dice had in mind about going "nation wide".

All production (and post-production too) by future Beats by the lb member Carlos Stephens, the only Medicine Man to stick with No Limit after they became "New".

I have to request that someone upload this related Mugz release because I've had a real high success rate with requests lately.

A real highlight from Adventures in Hollyhood: Paul & Juicy chinese blues a cappella improvisation. This shit sounds significantly better than anything on Last 2 Walk.

Posted by kid slizzard at 9:23 AM 6 comments 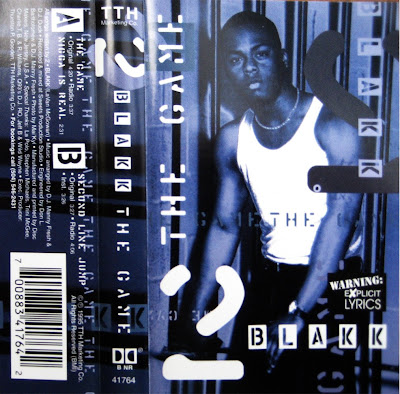 Liner notes credit DJ Mannie Fresh and DJ Duck and I wonder how those credits are split. I think "Nigga Is Real" is a giveaway Fresh track but then again none of these stray too far from the template, so its hard to tell. 2 Blakk shouts out to both producers in "Second Line Jump" so the division of labor may be overlapping.

I'm interested the history of this dated explicit lyrics sticker. I was thinking at first that this might be a pre-Tipper sticker, but it turns out that's been around since Ice-T's Rhyme Pays. I've actually only seen this sticker on New Orleans tapes, but that's likely coincidental.

All three songs are good enough on here, I really do appreciate having the "Second Line Jump" instrumental, though. Partly because I may want to put it to extra-curricular use someday but also because I think instrumental NOLA Brass Rap is in itself something worth listening to. I'm curious: how many other people listen to instrumentals like its full music?

Posted by kid slizzard at 8:03 AM 5 comments 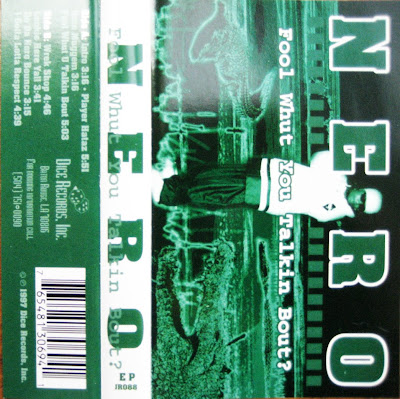 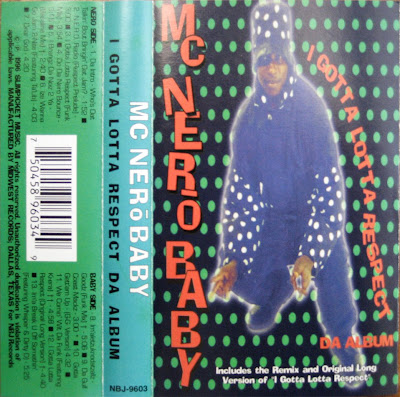 Two content-overlapping cassette tapes by different name variations of Shelton "Doesn't Cuss" Nero of Baton Rouge. What's strange is that the only other release I know of his is the Warlock 12" "Where You From (Dat Rouge)" which uses a third variation: MC Nero Baby. I'm trying to figure out what sort of situation could have left him dodging lawsuits filed against himself by himself.

Its possible the name change corresponds with with a shift in visual representation. Like Dots, Before the Dots and After the Dots.

I don't actually have anything to say about the music in these half-good cassettes (except that there are things there that interest me) but I don't want that to stop or slow down my posting at a point when I've been negligent and am sitting on a pile of need-to-rip shit.

I decided its not worth it to try and figure out how these releases relate to each other. They're in some no man's land beyond singles/EPs/LPs. I can't ever figure out which tape I'm listening to.

"Lookie Here Yall" from Fool Whut You Talkin Bout?. More Bounce tropes on this than any track on either tape, Nero Bounce included. 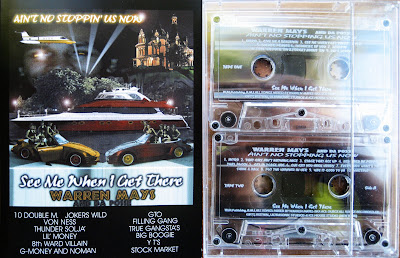 What is this beast of a cassette double-album? 37 songs, 4 sides, 2 titles and 1 giant insane cassette case like I've never seen or even imagined. An all over the place extravaganza - good tracks, bad tracks, some bounce and some not.. great micro-chopped triggaman bells somewhere in there and the unexplained gift of two bangin Rebirth Brass tracks to kick off the fourth quarter.

For this post there are media options, you can enter this music from any door, hole or window: download either or both tapes above or without commitment check a few different cuts via youtube:

I like the weird production on "I Am Gone Get's Mine", which like Playa Fly's "Nappy Hair & Gold Teeth" reminds me of the soundtrack to Tetris Attack for Super NES. Or "Are You Ready" which is the Comin Out Hard sort of Mission Impossible funk. Or "Stack That Ass Up"s Hammered Dulcimer Brown Beats.

Wait, I think I didn't draw enough attention to the case of this thing. It is almost the same proportions as a single case but twice as big and fits 2 tapes but sidewise.

Violent Cus its Really Fabulous Music

I'd like to know the details about 2 UNLV songs whose instrumentals were repackaged for other Cash Money artists' singles: Wayne's "Go DJ" and Juvie's "Set It Off". "Yella's Revenge" seems like its a Sinista junt and "Set it Off" a Mannie Fresh production - so what's up with that? I've always had a lot of respect for the Yella/Setitoff instr. which pairs the drag-net riff with the Halloween theme but slowed down and phrased instead of sampled. In my imagination I see all MIDI programmed rap played live - some asian teenager furiously plucking away the crazy pizzicato octaves while some drunk, blind man bangs piano low notes with one finger.

Posted by kid slizzard at 8:19 AM 1 comments

Yo Rob, is this what you were talking about? UNLV live on Lousiana Jukebox performing "Bootie Bop". This was uploaded at Louisiana Rap (what up turlet? don't stop, don't quit) whose Cbox is increasingly becoming the internet's de facto bounce mini-forum in much the same way as I have become one of the internet's de facto bounce experts and I can only hope I get backseated stat by some true bootstate professionals.

I know a lot of bounce-curious people who are intimidated by stockpiles of downloadable data and so in the coming days I'll be posting more streaming media (youtube) to supplement the shipments. I suppose even some of you foreal mpeg archivists can't afford the extra harddrive or even CD-R stack having been layed off or looking for work for god knows how long. From now on, everyone can Twankle. At least a little bit. If you have a computer. And the internet...

So many NOLA tape rips and the other parts of this vid coming ASAP. All time lost will be found, I promise.