Bird on his Head 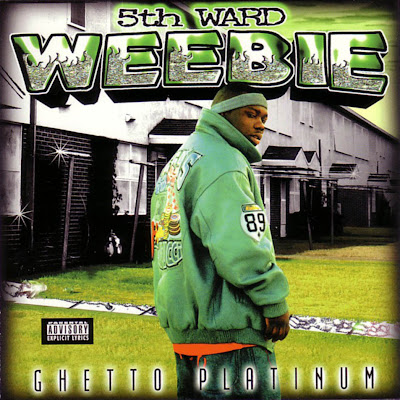 And to follow up the previous post marking No Limit's ascent, here's one beast to rise from its ashes. This is the best record I know of on the Kane & Abel twins' Most Wanted Empire label and maybe the best posthumous No Limit camp offering to drop before the forming of Overdose Ent. A convoluted claim to start with and actually I have to take the latter half back remembering now how great the Medicine Men produced tracks were on Mystikal's Let's Get Ready.

Nothing likely to surprise you too deeply but I love some of the supersaturated production by Full Pack and Weebie is a great bounce vocalist. Surprising to see Three 6 on this though I guess this record came out around the same time as the Headbussas collabo with Fiend so maybe this is an extension of those friendships formed and not just a pricey cameo.

One has to wonder if the Twins could have really taken off record business-wise if jail time for their connection to drug kingpin Richard Peña hadn't slowed things down and I enjoyed getting to know them a little better in their 2004 comedy Da Block Party. I have yet to check any of their ghetto fiction novels. I'll get back to yall on that. 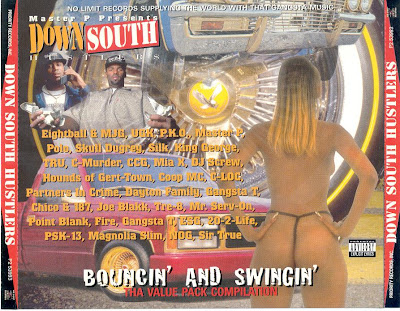 One of the most essential (or at least extensive) documents of a nascent southern style, even if most tracks wear west coast flavor like an older cousin's clothes and I guess Flint's Dayton Family are honorary Down South Ballers. This is often referenced as the First Rap Double Album, a kind of irrelevant milestone.

Another great cover from NL's Phunky Phat era and you can find an archive of PP graphic design nostalgia here, tucked in the ass of KillaHoE's strange french geography MP3 blog and despite this being pre-beats by the pound days at Camp No Limit, you can find early production from KLC, Mo B Dick, and Carlos Stephens scattered about. This record is consistent and focused in a way No Limit rarely was. If P was only in it for the money, he must have known he couldn't make much without some early fire.

Time for the Slammer 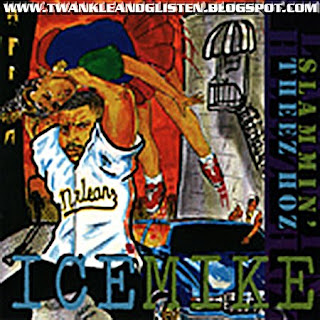 NO Producer Ice Mike's 1994 full-length, Slammin Theez Hoz. I'm imagining Mike drawing this cover himself with a pack of crayolas. Don't necessarily think he did but it has the intimate look of work by a disturbed visionary. The production is all insane, tight and varied as hell. He lives up to the claim that his "records sell without a Triggaman Bell", packing 20 classic samples into one track where other NOLA producers would get stuck on one or two. Meanwhile, his MCing is all over the place, shifting freely between Geto Boys' brutalism, Too $hort pimping and Blowfly scatology in a way that suggests he could pull off any style he felt like. He comes off best on tracks like "Shittin' N Dat Hoe House" & "That Hoe Got Feet Like a Nigga", where he's more humorist than gangsta. In that sense he's got a lot in common with Mannie Fresh, though he's no doubt a better MC and certainly a comparable producer.

Posted by kid slizzard at 9:15 AM 6 comments 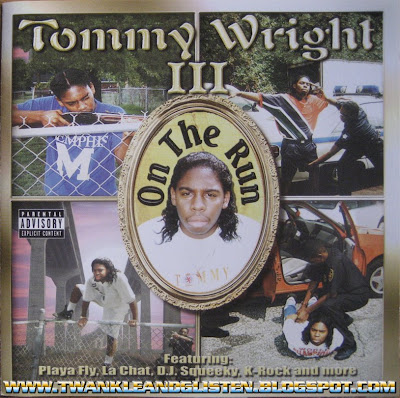 One of my top ten favorite rap records and maybe number one in covers, designed by this dude whose myspace features a john mayer music player, a bible verse widget and a picture titled "kitty bed time".

I've read that his first single was produced by DJ Paul, I wonder what that is and I wonder if I've heard it. And I wonder what Tommy could have pulled off if he hadn't spent the first five years of the new century on lockdown. Maybe he would have fulfilled the epic sized promise in On the Run's liner notes:

Anyways, nothing else really sounds quite like this. Not even other Street Smart records or earlier Tommy Wright tapes. Although there are guest production spots alluded to (Squeeky, MDB, Blackout), vague inner info suggests its really Tommy whose responsible for the distinct and completely horrific counterpoint gracing these tracks. Shit is so evil and dissonant... and complex. I can't help but imagine Tommy sitting in some blood-spattered dungeon slamming Old E 40s and listening to Bartok.

Oh and I've been enjoying the tracks on former CIA member Charlie Brown's myspace... does this record exist? God has truly fucked up by blessing a nigga like Tommy Wright III.

Posted by kid slizzard at 8:20 AM 5 comments

Caller Dickhead, Check Out My Crack

Blowfly's proto-rap masterpiece. Supposedly this song comes from 1965 though this version was re-recorded in 1980 for TK Disco, making it something like the first rap record. 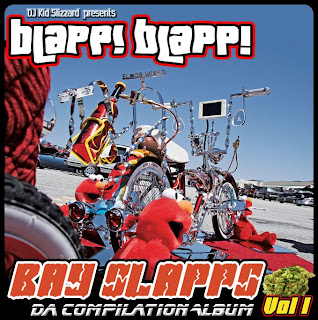 I think I just make these mixes as an excuse to design covers (one a yall need to get me job doin that). Anyways, check it out - 80 minutes of new bay something or other. The "hyphy movement" always felt a bit more like the kind of ad campaign that never overtly mentions its product and I always felt the news story of the one dude dead from Ghost Riding in Canada was some deep metaphor for the movement that I couldn't quite rap my head around.

Anyways, whatever it is and whatever its called, there's plenty of bay bangers buried in the bullshit. Two artists I'm holding my breathe for are D-Lo (who maybe is locked up??) and the duo Bitch I Go, who get extra points for their unfuckwithable name and rap royalty bloodline (member Lil 4-Tay is daughter Jasmyn of Rappin 4tay and has been guest MCing on his records since she was an infant). Anyone who can hook up or point me towards more of their shit, whatup...

A rap lyric pet peeve of mine for the past couple of years has been shallow poop punchlines (though somehow I feel fine about R.Kelly piss / pedophile jabs which seem to have proliferated at the same rate) - NONETHELESS, I can't help but love the "Shittin on Fools" track on here. Maybe its because they truly bring the duke. Maybe its the fart synths' self awareness. Either way the ante is up and even in the worst game I gotta respect that.

In a Zag or a Pipe


The first in a series of Bay area related posts, as I attempt to connect a bit deeper to my new home in the Sco. Nickatina reminds me of DJ Spanish Fly in both flow and vocal timbre and I'm wondering if maybe the direction of influence runs the other way. Also, I can't say enough good things about RBL's "bammer" weed anthem - track or video: twirling condom, smoke overlay bay silhouette, dank breathing fence hallucinations.

And I apologize for the time lag, we ain't fallin off or nothin: Twankle&Glisten for life. I mean, until I get the boot or the wireless network I'm jacking turns secure on me. Oh, and let me say this: embedding disabled by request? Bitch, please. 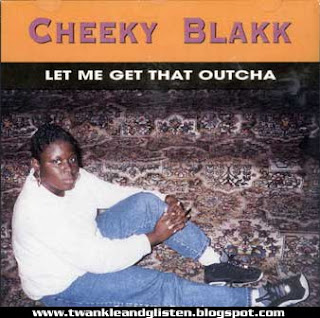 By request, Cheeky's 1995 format-defying debut. Single? EP? Not sure: 5 street tracks, 2 instr. & 2 clean, though not the same ones. I think a prior version of this may have come out on Mobo Joe vinyl, so this Tombstone release may be an expanded CD version. The focus of the request and as such the reason for my posting is the instrumental version of "Bitch Get Off Me", samples of which you can hear all over the Money Rules Ent. post from yesterday. Think of it as Brown Beat & Triggaman's illegitimate child, growing up in a world of Mannie Fresh flourishes - dog barks, wobbly scratching and hard ass inline eighth notes stabs that sound like someone getting beat down with a baseball bat.

Oh yeah, and a new bounce dump in the hollerbox, pushed to the side because I'm not taking credit for it.

Posted by kid slizzard at 9:26 AM 2 comments