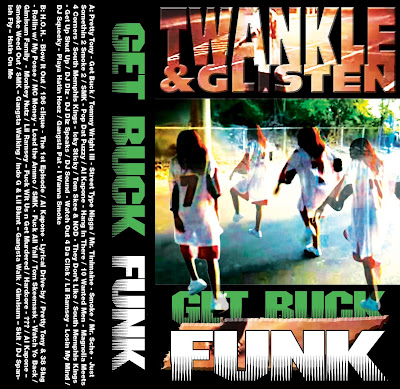 DJ Kid Slizzard presents...
Get Buck Funk: Da Mixtape
Side A, Side B

Another non-stop mix set up to fit tight into one 2 sided C-90. Anyone interested in obtaining a hard copy without making it themselves can hit me up at jib.kidder@gmail.com.

Aged and rare hardcore Memphis rap has had a strange life in the internet age. Scarcity must have played its part - where upstart New Orleans labels were able to piggyback on Cash Money & No Limit's respective cash trains (or at least get wrapped up in their cash dreams), local Memphis rap defined itself through infighting and Three 6 beef. This kept labels small, tapes circulating from trunk to trunk and then eventually through online auctions to this dude. Early tapes have become international fetish objects and now Russian Rap message boards are filled with obsessives' alphabetized Memphis collection lists. Shit is constantly clouding up my googling.

Compilers of this shit too often zoom in on the horror/devil shit aspect of the M-Town underground. Though plenty of cuts on here flaunt that darkness it is in no way the binding element. I've always found early Al Kapone much more compelling than, say, Evil Pimp. Instead, I've organized this mix around a different force: the Funk. I'm thinking of 'funk' in this sense as a measure of some rhythmic Gestalt, or the felt presence of some thrust able to propel bodies into motion through sound. The 'funk' of Get Buck Funk is a hard 'funk' - it has to be: gangsta walking is a hard ass dance; a gang is a hard ass kind of family.

The Get Buck sound of Memphis is just as indebted to its Soul past (in both the productive and consumptive sense) as NOLA Bounce is to Second Line, evidenced both through its sample sources and frequent "bumpin Womack" or "bumping Marvin Gaye" shout outs or even just what audio rolls in skits' backgrounds (see the H.O.H. track on here).

Many different kinds of shit on here: SMK's "Fuck All Yall" may be a pre-sippin sampling of Marvin Gaye's "Is That Enough" and his "Pop That Puzzy" almost sounds like a Dance Mania 12". If DJ Diz's black revolution cut-up just had a fucking djembe in the mix it could pass as an interlude off the most recent Badu record. Though all this shit is fairly gutter production-wise, I think the Tom Skee track on here maybe be the lowest fidelity shit I’ve ever given a close listen - I had to triple the volume just to make it audible in context. Oh, and plenty flavors of weed anthem scattered about.

Monkey Nuts is such great crack slang and someone answer me this: does Indonesia actually export any weed to the US? Would it be worth it for any party involved? An Australian woman got the fucking death penalty for weed possession in Bali. Maybe the price paid in lives makes Indo weed a delicacy enjoyed only by the greatest of rap veterans. 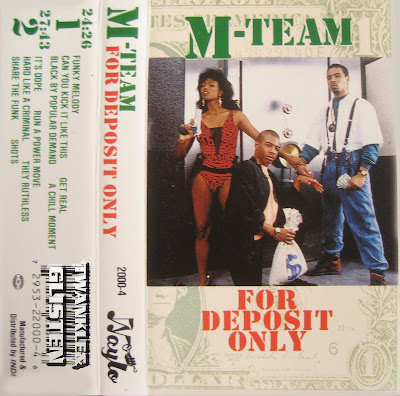 For today's sendoff I first considered Jazze Pha's debut record (as Phalon), Rising To The Top, but backed out both because we don't fuck with major label records here at Twankle & Glisten (its on Elektra), and because I try not to guide anyone's ear toward jams that weak. At some point in the future we might throw up a second generation Bar-Kays mix - Pha is the son of bassist James Alexander and Gangsta Pat that of drummer Willie Hall - maybe a mix of tracks birthed through sampling and those birthed through... um... birth.

In place of that is a different cassette from Memphis Soul progeny: M-Team are brothers Archie & Boo Mitchell, sons of soul artist and Hi records founder Willie Mitchell, and the same production team behind the Radical T record posted a while back (which feat. early raps by Al Kapone and 8ball). It may also be mentioned that producer Phunk Dawg of Ay Bay Bay fame apprenticed under their father as a teenager.

This is going to be a bit too New Jack for most of yall, but its great for a comparative analysis of contemporaneous Memphis releases, like the first tapes of Skaface Al Kapone or DJ Paul's first 4-track fuckings around. Either way this is one of the earliest rap releases out of Memphis, at least in terms of what has survived to the extent that it can written about. Cool K's "I Need Money" predates it by 5 years, though, and if anyone can offer up an MP3 or cover shot of that it would be much appreciated.

Rapidshare raised their maximum upload bar and now both sides of a tape fit in one rar. This is good for you because it means you only have to enter that elusive password one time. 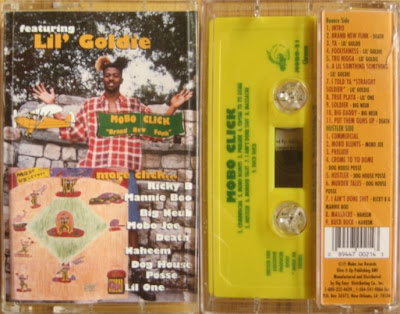 Today's upping is more puzzle piece than full meal. Folk over at Louisiana Rap have been spreading Mobo Joe mp3s like a disease. Messy and deadly, but still much appreciated. Both the Lil Goldie full-length and Souljas of Sorrow's Buck 2 the Bang (the former straight and classic bounce, the latter some strange horror-bounce offshoot) are well worth the harddrive space and minimal mouse-click effort. Anyways, this Mobo Click tape rip is intended for filling in the cracks over there. Originally planned for a Take Fo vs. Mobo Joe C-90-sized mixtape, and though its still on the T&G to-do list I figured I'd best post something soon instead.

Such strange childish colored pencillings gracing both this and Lil Goldie's Act a Donkey and I haven't seen an opaque yellow cassette like this since I was a toddler listening to Mousercise on my Walkman Jr. No prison art on the front of any other Mobo Joe release I know of leading me to credit the amateur art to Goldie himself and I like that fantasy enough to stick with it like fact. I do love, however, the airbrushed world on the other Mobo Click joint.

But to get on to the real shit - on the Mobo hunt, pointed googling unearthed a beast that surely outshines the tape here offered. It's a vinyl rip of in house producer Death's banging full-length, Possessed by the Ouija Board - link still hot over at East ATL Theory. One of the first posts of a relatively new blog, but I didn't see much else there of this kind of thang.

Death produced half or so of Brand New Funk, but he's holding something back there that he lets fly free on his own tracks. Maybe its the freedom to venture past straight bounce boundaries or some deeper pact with darkness formed but this shit is fucked in the best way. It shares a lot with the aforementioned Buck 2 the Bang, but on Ouija Board he's further out on his own trip and his vocals go down a lot easier than the Souljas' strange, warbly affectation. I put sugar on your heart so it taste like a donut... 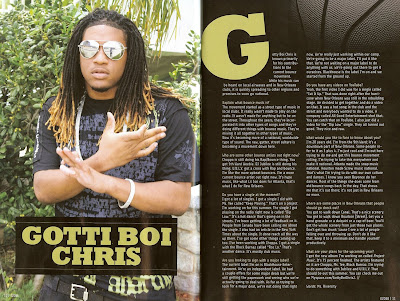 Gotty Boi Chris interview from recent issue of Atlanta's Ozone Magazine which in the absence of Scratch is becoming the second most interesting rap mag around. Journalistically less in depth than Murderdog by far, but for some reason the Dog hasn't yet covered any next generation bounce shit. 10 pages each issue dedicated to midwest clown rap but no love shown for America's most in-need rap center?? Click on the image for legible sizing.

5th Ward Weebie, PNC & DJ Money Fresh also up in this issue and this seems like a good time to note the arrival of the Louisiana Rap blog which more or less picked up where Rarenola left off and anyone whose read this far should go cop the Joe Blakk record posted there right now.

I'm interested in Gotty's notion of Bounce as music for the street in the way that Bass is for the car, Screw is for leanin and Crank is for...umm... youtube and anyone interested and patient enough for getting into some relevant rap academia should check T&G homie Matt Miller's Dirty Decade: Rap Music and the U.S. South, 1997-2007 paper on Southern Spaces. 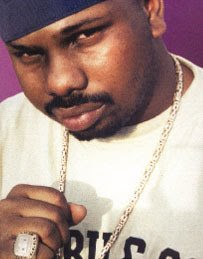 I remember he took me to the Cappa Beach Party and it was my first time going to some shit like that. At the time Screw was a celebrity like a muthafucka and he already downplayed that shit. He would never even trip off that shit. He was like "I'm gonna pick you up and we are gonna go to the beach party!" I was trying to get to the barbershop and get a fade right quick. He came to pick me up and before we even got out of Houston we was sippin lean like a muthafucka. Before we got out the neighborhood we was leanin like a muthafucka! I'm in the back seat leanin, there was someone in the back seat with me and he was leanin asleep and Shorty Mac was in the front passenger seat and Screw was driving. About 15-20 minutes into the ride I fell asleep. I woke up in the back seat and I was looking around. I looked to my right side because I was sitting right behind Screw and I looked at Grace and he was snoring. I look in the front seat at Shorty Mac and he was snoring and then I looked at Screw and he was snoring asleep and he was driving! The shit was so fucked up because Screw had his arms folded like he was the passenger or something, but he was driving. I couldn't do nothing but scream because we were about to go to the guard rail. We were in the middle of the bridge and the guard rail was getting closer and closer real fast. We were in the far left lane, but we were headed for the far right guard rail crossing the whole muthafuckin freeway. I was scared as a muthafucka!

Screw opened his eyes and he was so calm and cool! This nigga put his pinky finger on the steering wheel and got the car under control with his pinky finger. He looked in the rearview and smiled at me real fast. That was my first time going to the ghetto beach party and that whole weekend was full of shit like that. We were coming out of the room going to the Big Pokey concert down there and we were in the elevator all leanin. Once we get to the ground the doors open and we were all asleep in the elevator standing up. The police were standing right there when the doors opened up. They were like "Man, you are all on that shit, huh?" I was tryin to close the doors like a muthafucka! It was funny like a muthatfucka!

Stalling on a pile of new mixes - today's post is a tour of the Hotstyle's Lookin Ass Nigga youtube parody explosion. Best highschool lunchroom recreation since slaps and the first convincing argument for the slideshow format I've come across. These are in reverse chronological order starting with Cornbreadd's Houston Version (probably the best on all fronts) and ending with one that reverse half-abandons the slide for weird personal video.