This was the youtube video that got me into youtube videos. And I bring that up now because it also got me into DJ Sega, the man behind this balls-out rmx of "Tell me when to go", and this motherfucker just unleashed a masterful remix of Sissy Nobby's "Lay Me Down". Its a rare occasion that I chime in on the present but this seems like the first decent intersection between 2 obviously compatible aesthetics.

And to think this will be on actual wax with a Bitch Ass Darius remix as well..

Three more early Memphis classics, all gleaned from elsewhere, where elsewhere is the linklist anonymously served up in the comments to this former post. I'd grabbed a version of the Gangsta Pat & Legion of Doome .rar a while back (Shootin on Narcs Pt. II) but it was fun to revisit today. Fake female bass fetish in the model of "Bitches Reply", kind of sounds like if Ween did a better job at themselves. Hilarious, explicit gender fantasy.
The other two tracks are new to me today, so I've been able to enjoy them on repeat. Both seem to share a lot of qualities with the emerging raps of other southern regions around the same time. LDOG's offering sports the most eccentric production of the three. Geto Boys / Ganksta N-I-P style brutality with unique samples and the sort of synth bass line we've already seen from contemporaneous cuts (M-Team, Men of the Hour, Radical T, SMK aka KMSM) which evolved (through measure of stylistic restraint) into the harder backbones of early Ball & G joints. Meanwhile, the drums share some essential qualities of flow with the Famous Lowdown Boys single from New Orleans and every reader here should be begging Noz to post that on his site because he is the only motherfucker who has that record. I wouldn't sleep on the other two LDOG tracks that came with this either, so yall follow my tracks, or, I mean, follow the tracks I followed. Other people's feet. And someone wise from the Memphis area, fill in the acronym. Who is L.D.O.G.? Why does the intro say "Chicago City"?
And then BRRRRR, Icy K raps clean for the radio. Poster / homie Thug Doubt placed this as a response to the "no rap" commercial radio campaign of the time. Similar themes explored on the other side to this single, "My Kind of Music". 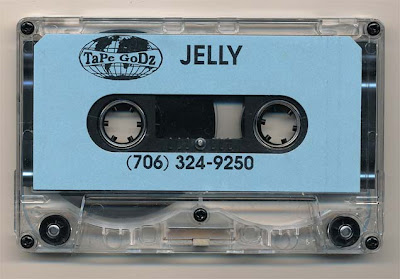 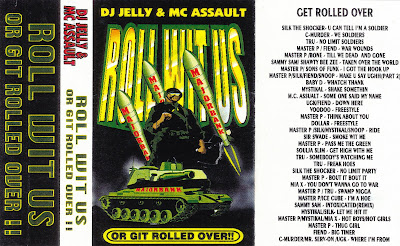 Roll Wit Us or Git Rolled Over!!
or
Get Rolled Over
(199?, Tape Godz?)
cassette -> 320 mp3
[side A, side B]
I've had plans for sometime to make a No Limit mix and I did, months ago, dig in deeper to the NL discog than I ought to have because weeding-out is a tough task in a yard with so many weeds. After time, one Uhhh out of P and I was nauseous.
But still committed, even as T&G becomes more and more a blur of the past. Which is why it was a profound relief to me to happen upon this Nineteen Ninety-Something underground Oomp Tape for a couple of dollars at Ann Arbor's always excellent Encore Records. Not just because my favorite NL tracks are on here, compiled - but also because Jelly's collagist mixing turns the raw stuff of the tank into something more distinctly like art. Or at least something more distinctly like good music.
This tape really supports an Omar-S philosophy of Yeah bitch, that’s all the record do... your lazy ass needs to do some other shit with it... except where that idea grows out of the minimalism of Omar's shit, it works just as well with the dryness of the No Limit catalogue. There was too much talent on both the MC and production side of their roster to not create some great things, but the centrality of economics to their whole operation had to muddy the successes. And the main misstep, aesthetically, (besides the spawning of rap careers that never should have spawned, like Silkk) was the move away from the murky legal territory of sampling and as a result, DJing, its father art-form. And like that, the Southern Style DJs inject the life right back into the shit.
There was a really great Jelly interview in a Murderdog from around 99, maybe 2000. I had plans to and even started transcribing it, but it seemed MD was going fully on the archives. And though that hasn't yet materialized, and even the opposite appears to be true where old interviews that used to be hosted there are now missing, this is still a great time to mention that the magazine is now fully available for free in digital edition, which looks great and is not rounded down in any way. But this issue had an extensive Atlanta feature and everyone had the same thing to express, which was the felt impact of the Tank. How it changed the streets, the sounds, the industry.
And in a way their greatest offering was their impact, not their content, which is why its a true pleasure to have this object, which serves up their content through the lens of their impact. The experience of No Limit from a DJ (group of DJs, really), who loved this music, felt its impact, got off their lazy ass and did some other shit with it.
Notes: Look out for the end of side A, goes into some surely unintended skipping during the weird mixing of Teena Marie's "Out on a Limb" and space sounds and home-recorded smoke/choke cadillac/dank anthems. Also, I want to mention that one of the questions I really wrestled with when trying to do this on my own was how prominently to feature Snoop. The Oomp answer here is "prominently". Also, you can check the tracklist in the JPEG, but it doesn't have much to offer in the way of truth value. Wonder if he still has that northeast Georgia phone number.