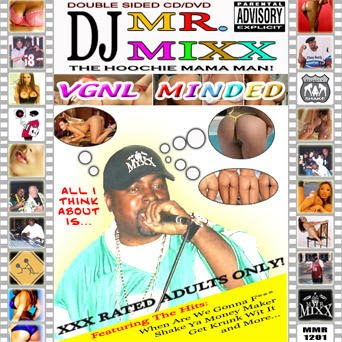 You know, I lost the cover to this one so I thought I would just share this barely related yet completely amazing cover instead, found on Mixx's Myspace a while back. Do need to cop this hopefully-existing-and-within-my-consumptive-reach release, VGNL minded, though.

The actual rip here is from Mr. Mixx's "Bass from the Bottom" series on Priority (which includes other titles Shake-a-Booty Bass, Bass, Beats & Breaks and Divas II). This has been a walkman mainstay of mine ever since having stumbled on someone's 30-tape-deep outgrown bass collection in a strange new age bent record store.

I can't be sure whether or not David "Mr. Mixx" Hobbs was turned on to the contemporary rap undercurrents of Chicago and Detroit and wherever else or if this kind of stripped-down, strip-club booty begged itself into existence in such a way that even before being made it was here and always would be. An always already-present present. Even in absence. Aside from a little nuance, this stuff shares everything with its Ghetto-Tech cousins (maybe a bit more cheesy), but no matter which way you bend the family tree its Hobbs himself as the damn father or grandfather to both movements - there'd be no Ghetto House if it weren't for that Shake, and there'd be no Shake without that 2 Live.

Either way, Mixx's discography is going for pennies on Amazon, I think I'll scoop up what I can right now. I mean, I don't know how valuable your time is, but, depending, it might be cheaper for you to just fucking buy this there instead of DL here. See what I'm sayin.

A video to supplement this blog's official presidential campaign endorsement which you probably noticed embedded into our banner. I might not have felt compelled to post this if it weren't for some Ron Paul jackoff on Realraptalk's posting of "McBama" banners and Dead Prez rambling about selling Obama thru hip-hop and voting by not voting and then like metaphorically voting by raising a revolutionary son instead. The world will be completely different one way or the other. Actual things will happen in the world. You get to choose one way or the other or no way at all. I mean if you can't fucking carry that tiny weight, the weight of choosing the category of actual things you'd rather have happen, given 3 choices...shit it aint that hard. 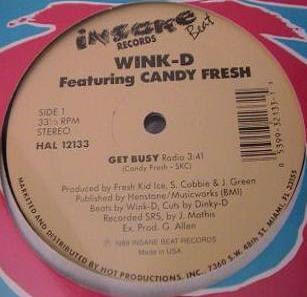 Wink-D's proto-bass beats...so weird, so slow. Let me know if you know: is the "440" referenced here some piece of equipment? The drum sounds here aren't the usual 808s. "Get busy" is some great "When I Hear Music"/ Kraftwerk cut-up.

I wonder what Fresh Kid Ice's real role was here. I met him in studio @ Ann Arbor's college radio station. I had him do some drops for me, ultimately featured on my record, finally out. But I left the interview up to someone else. What a goddamn mistake. And I couldn't scrap together enough pennies to see the new 2 live play at whatever fraternal sports bar had booked them. Got a Camo Silver Ice instead. 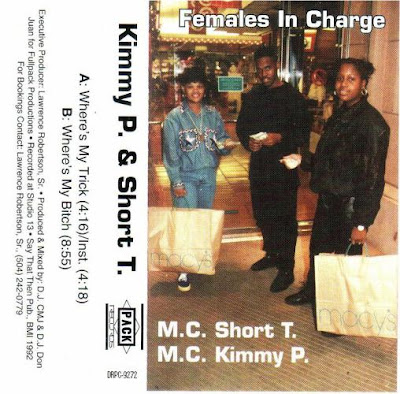 This is ripped from vinyl, not cassette, I just flipped it coverwise cuz the wax has no image and I wanted to give yall a chance to check those starred breast pockets. It does, however, feature a librarian nitemare of a namechange - Kimy P. & Shorty T.

A great record and the best kind of single in the sense that despite its function as a promotional object, all tracks offer something additional to the casual listener. OK, maybe not casual listening, but at least private use of obsessives. The clean-up job is funny and the instrumental works well as like a kind of bounce dub plate, (if it only had a little reverb) and it wasn't until checking it isolated that I really noticed the sung "bitch"s that punctuate the backing track.

Not saying its a direct response, but this track features most of the samples present in Everlasting Hitman's Bounce, Baby Bounce! And it's important to this blog because its the namesake of our gender tag.

Ask how his teeth got chipped, cuz the pussy he ate was whipped.

Looks like they found their bitch after all. At Macy's. With all the cheese. 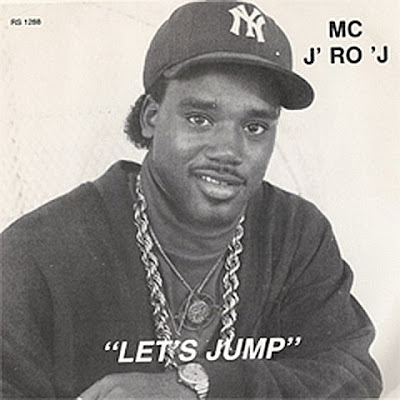 Starts off with the same oom-pah march of Gregory D's "Buckjump Time"... such a strange rhythm for a rap song - squared-off, the heartbeat of punk or polka or some shit. Where is room for the funk in that? But then a shuffling snare lays down, a tuba weighs in and before you know it the whole second-line ward-repping parade takes over.

Nothing else really sounds like this. Not even other contemporaneaous NOLA brass-rap. I suppose at the time local modes of rap production were still unformed enough for shit to sound really individual and distinct.

Posted by kid slizzard at 9:59 AM 6 comments 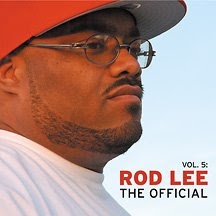 Alright, proud to introduce the pages of this blog to the tag "bmore", a city and club-music style that apparently don't get much love in the Bay - I pulled this disc out Rasputin's B-bin for a $1.99.

Rod Lee packs just about every element we respect here @ T&G into his dense and varied mixes - region-specific individualism, penetrating repetition & funk syncopation, explicit sexuality, audio theft and appropriation and an unusually healthy balance of street attitude & social criticism from a tough but uplifting perspective. The best sampling can take a sound you hate and suspend it in a such a way that it floats free of your negative associations and I can think of no better example of this phenomena than Rod Lee's use of Lil Jon's cartoonish sloganeering. I like his early crunk bass-chants but the change in his vocal style that marks his evolution into name-brand and pornstar rubs me like Jar Jar Binks.

I wonder why television's historical best failed to feature more local club soundtracking. I heard Technics did some consulting but that was only one episode and if I remember correct there was a stilted feeling reference to "Jiggle It" or something. And I'm not directly making the claim that Lee came up the whisper but I did still want to note that the official release date for this disc predates the Ying Yang full-length by a month or so. 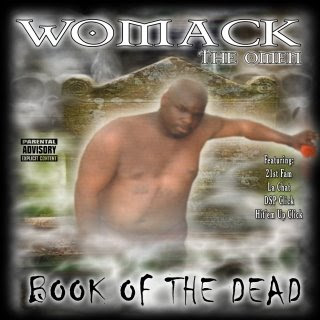 There is meaninglessness in this. Archive passwords, premium upload accounts, external hard-drives, message-board hierarchies, expired links... rainsoaked tagless bootlegg cassette-rips of records you never would have wanted if you hadn't first seen them move in online auctions for 3 digit figures.

In a different sense, though, good record collecting always was a compulsive disorder and in the absense of some coordinated and all-encompassing online audio-archive database (currently impossible, currently illegal) there will always be some gems off-radar, whether 45 RPM or hyperlink, left to stoke the fantasies of the incurable. I recently downloaded some disturbed number of Fuck Action and Lights Off .zips leading to the sort of misguided listening that creates more aversion than either pleasure or knowledge. The best feeling I got from those files was watching my HD space double in one recycle-bin dumping.

But just when MP3's were starting to feel like some niche-porn jpegs - the intangible and illusory representations of real-live records - BOTM uploaded the fucking Womack Da Omen album. And having worked up reality-sized anticipation, I'm sitting here right now enjoying this like a true plastic tape. Whether it lives up to itself is a question not worth asking. Instead: where are the La Chat verses? And I've heard a few, but this is one of the strangest hardcore appropriations of Enya I know of, good Young & Restless tucked up too. 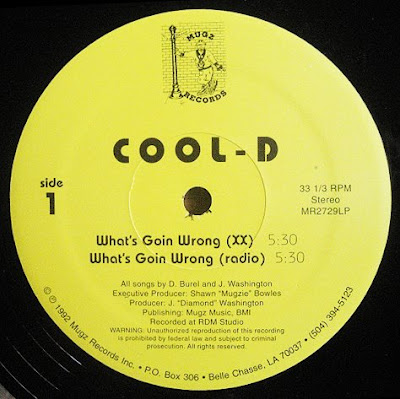 Another one from the Mugz label (also responsible for the original pressing of recently-posted "Sista Sista").

My copy is a little worn in - some kind of watery peaking in the loud spots. Track is all lean and simple societal reflection rap. It might be too boring if not for the organ part and I do like his rapping style.

Cool logo - you probably can't make it out from this hand-held scan but our Mugz cartoon homey is posted up at this intersection. Reminded - I should work up a logo collection for the right-side images...

Claim is this 12" came out before his full-length, the Unexpected, and check the cover on that motherfucker. Great raw nola style and post-modern iconism. With that shirt on he could be back from the dead and ready to attend his own funeral. And the expression on his face both real and interpreted says almost nothing at all.

I would parrot that he later rolled with the Gotti Click, but I don't know shit about that. Take it up with Dober and while you're at it check his deep and scattered collection of covers. Got one of my deepest screen-stare headaches since the day Super Mario 3 came out when I found that.

Finish This Shit Up Right 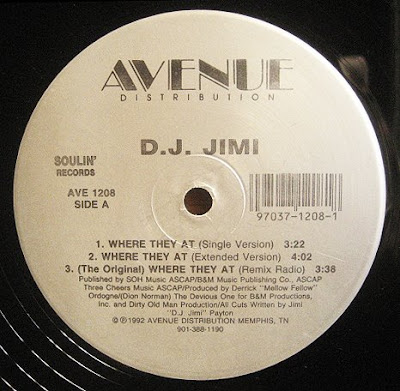 Sorry for the re-tread, but that's how a path through the forest is built. And re: the password - no more mention of it hereafter on my part, consider the screen-scan required for the egg-hunt as the lone remnant of those eye skills once needed for vinyl pile digging. Here I'm sharing the fruits of lengthy obsession, spend a moment soaking.

Yall ever wear latex at the record store? I've only ever done that at The Thing.

I posted the tape of this a while back so excuse my lack of freshness but I couldn't help but be charmed by the parallel structure and I've heard images are more interesting in threes. Assuming this is old hat you can at least next-level your rip and you can't much complain anyhow - Bitch's Reply has got to be at the apex of many rap bests, I'm just not going to take the time right now to sort out which ones. Clear enough rip that you can use this for your own professional sampling, I've heard it goes well with the Puppetmaster theme.

Reviewing this reminded me to remind anyone still claiming Gimme What You Got! is a rip-off of DJ Jimi's rip-off that nowhere on this plastic plate can one find the Ike's Mood keys spread clean over FM's remake.