Whose That Knocking on the Door? 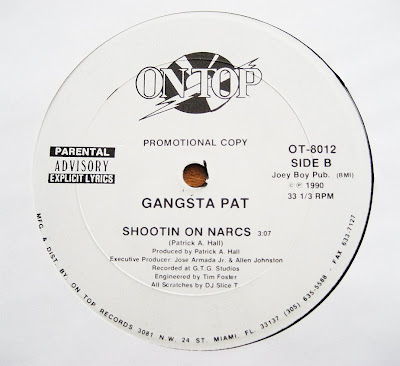 Gangsta Patrick "Too Big" Hall, son of Bar-Kays drummer Willie Hall. His first single and probably the hardest pressed wax from the city of Memphis in the year 1990. I included the remake "I'm Still the Gangsta" from his 1992 release All About Comin' Up so you can compare major and minor production values. From Roni Saarig's Third Coast:

Before Pat was out of high school, he hooked up with a label called Good to Go, but one day he and the label's owner, a hustler named Fat Tony, were driving down Beale Street when a gunshot entered the car, killing Tony.

A guy named Reginald Boyland took over and renamed the label On the Strength. Over the next few years, OTS almost single-handedly put Memphis on the map by releasing records from the city's most significant early acts - the first of which was Gangsta Pat. Growing up the son of a famous musician, Pat traveled with his dad to shows and learned to play drums, keyboards, trumpet and guitar. But he also went through rough times in White Haven and other deteriorating parts of Memphis. Though initially an LL Cool J adherent, Pat changed styles once he heard NWA. As a gangsta rapper, Pat fell in love with the Geto Boys around 1989, when they made a promotional appearance at a local record store. He gave them his tape, and they liked it so much they invited Pat to join them on tour.

You'll recognize lines from the B-side for their later sampling in seminal early Ball & G or 3-6 tracks (Shoot his ass down to the concrete; whose that knockin at the door / narcotics). How much local wax was around to sample? On Paul's earliest leaked tape he makes weird 4-track funk out of Al Kapone's "Once a Thug".

Posted by kid slizzard at 8:41 AM 4 comments

Boogie in the South: the Compilation 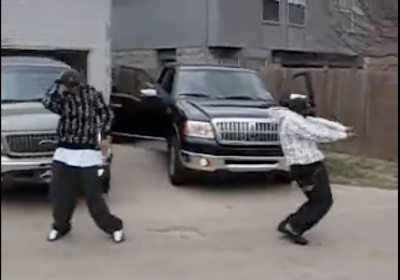 Various Artists
"Boogie in the South"
@ O.P.B. (Other People's Bitrates)

Alright, falling out my slumber & upping this quick limewire compilation of Dallas Boogie. I apologize for not having an nice little essay on the dance or genre or related dances and related genres. I ended up reading some jerk-off academic blogging re: the Death of Michael Jackson and it really just soured that kind of thing for me. I acquired a reasonable amount of similar tracks from BR, Louisiana and I intend to share that soon as the complementary "Jiggin in the South". I realize the extent to which pinning styles to specific mapped spots is completely unfair and increasingly inaccurate but still I appreciate the beautiful order in it. I included some complimentary myspace flyers in the .zip and I realize now I accidentally included the anatopistic Short Bus Boyz. Excuse this. Does Lil Man's "D-Town Boogie" reference NOLA Bounce Butch Big Freedia's "Gin in my System" or is that a more widespread expression?

Tommy Wright killed this blog's ambitions. Email him and tell him to take a trip to the fucking post office. It can't be that far.

My rapidshare account will expire very soon and I'm not renewing it, so now's the week to hit up the archives.

Although my blogspeed has been triple slow screwed of late I have been getting into a lot of recent rap and forthcoming posts should knock Twankle out of the vintage-only box. And its weird to see all the connections between the styles. Crank Dat's influence on Dallas Boogie, Go Go mixes of Boogie and Crank tracks, Baltimore style sampling on the new Jacksonville shit (and the obvious Bounce & Bass influence there too). Shit is getting messy!

What up to AFP for pointing me indirectly to these new GoGo vids.

Some of these XIB cuts sound like they were recorded live on a cell.