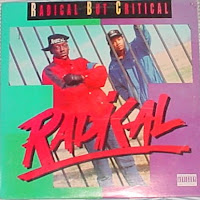 Radical T - Radical But Critical (On Top Records, 1991). First album by forgettable duo Radical T, relevant (perhaps) for featuring the professional debuts of the Fat Mack and Al Kapeezy as guest MCs. 'MC Al' has such a weak ring to it and I read recently that even when he was a kid his grandma was calling him Al Kapone. The disc is kind of like a Memphis version of Gregory D's The Real Deal in the way mainstream cheese masks nuanced local talent in a nascent scene. Ball sounds the least dated on here and I wonder if these two rapping young brothers have more of a Memphis distinction on 1997's Straight from the Jungle. One for the archives.

Straight from the Jungle, courtesy of google: http://link-protector.com/434631/

Dude those guitars are funky as hell!