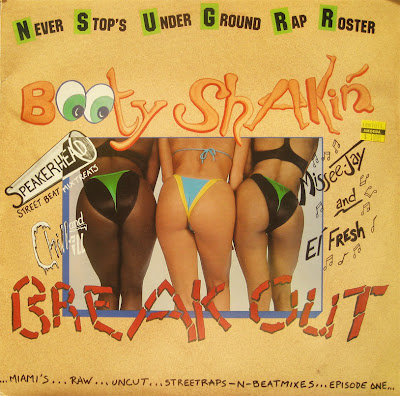 I was uploading these at a reasonable pace until I realized the extent to which Drop Da Bass was on some kind of completist mission. Today's upload has slipped through their cracks, though. Actually, many cracks. Can you believe the google search "Booty Shakin' Breakout" yields 3 results?

I found out about this record because I bought it, or thought I bought it, for two dollars at Amoeba. I did check the contents, at least so far as confirming the Pandisc logo and near mint status. What I didn't check was the title. If I had I would have discovered the record enclosed to be a Renard with No Regard feat. Ced What full-length, which I may post at a later date. Right now, I'm not even previewing the shit, I'm waiting for the bitterness left from its camouflage to evaporate. Like you know how bad some food tastes when you think its another food.

Then I was on a mission, distracted by this record's confusing title, which I initially read as Never Stop's Underground Rap Roster Booty Shakin' Breakout: Miami's Raw...Uncut...Streetraps-N-Beatmixes... Episode One. I finally trimmed that down and found a sealed cassette copy on Ebay, the perfect format for T&G bass consistency.

Anyways, my initial interest in this record stems from its label, Never Stop Productions, which put out the previously posted Gettin' Bass by Missy Mist. Never Stop is the label of Eric Griffin whose group Worse'em Crew put out a Luke diss record "Triple M Bass". Speakerhead is his alias and everything else on here was produced by him with the assistance of his "apprentice", Money Dee. The failure of this record released Eric from his Pandisc contract. Years later, in St. Louis, he was murdered in his own studio by a group he was recording. The fact that this information reaches us from a Miami Bass History yahoo group by Missy Mist herself reminds me that its the future already.

hey could you re-up this? a desperate want!