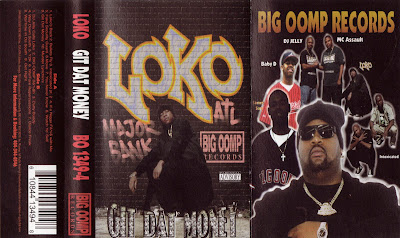 Having already posted a couple of other pre-millennium B.O. junts, I'm filling in the cracks.

I used to visit the bigoomprecords website just for their introduction, a soothing Flash meditation on the city of Atlanta. I don't think it devalues their output proper to say that their greatest contribution has always been their mixtapes, which surely are the most dense, most active and most historically-aware CD-Rs of classic Atlanta/Southern rap available.

The production style on their earlier records seemed like a hybridization of bass tape mixing and No Limit Soldiering. I know people are quick to point out the similarities in Three 6 Mafia tearing the club up and Pastor Troy getting crunk, but all the late 90s murderdog interviews with ATL producers like Oomp's Jelly reference a real shift in culture they attribute to the No Limit boom. P Big Mac'd the sound, standardized the palate, threw out costly and legally treacherous sampling and held hostage a team of production talent and gave a lot of folks new ideas about how to make some $$$ (see album title). But BBtP had their hands tied in ways Oomp's DJs didn't. The Big Oomp sound owes a lot to that NL shift, but they seem somehow more careful with it. Even if the only true innovation they added was fusing Bass and Gangsta vibes on tracks like Sammy Sam's "Ridin with Some Killaz" or "Dance Freaks" from this cassette.

I was disappointed by the recent full-lengths - Baby D and the second Unk record. Its not that strange because most new rap has been disappointing to me for a while, but when the first Unk came out it seemed a solid start for Oomp's second wave.