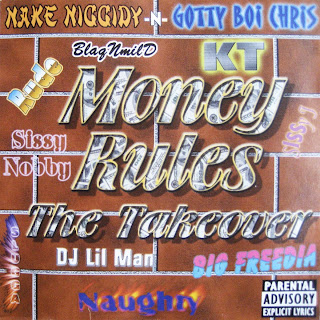 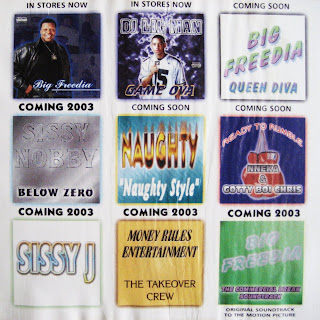 More 21st century N.O. bounce so as to pick up where rarenolamusic left off (RIP?) . This comp came out right before the storm and the cover looks like a pack of stickers your first grade teacher would buy at Eckerd's. Production creds for the whole package go straight to DJ BlaqNmild, easy to confuse with fellow bounce DJ, Blacknmild. A quick look at the former's myspace suggests Blaqbiggiblaq has jumped bounce ship in favor of watered-down radio style production - thats too bad. I think maybe he's still doing his bounce thang as a side hustle but trying to get to that national paper.

Big Freedia's amped-up "Gin In My System" is a definite highlight and I'm wondering what the hell this down-by-the-water sounding environments sample is that I've heard in a bunch of newer bounce records - Psychologically Ultimate Seashore? Freedia is one of Money Rules' handful of Sissy rappers (or reverse Sissy in his/her case), a good example of how rap has been actually gay, not just hypersexualized. Sissy Nobby is all over this disc too. In the past couple of years Nobby has replaced Soulja Boy as Most Strange and Active Underground Down South Rap Youtube Account Holder.

Unexpected samples from Enya to the Rugrats theme littered throughout and I threw in a jpg of the water damaged album previews to give you another taste of what could have been but never was.