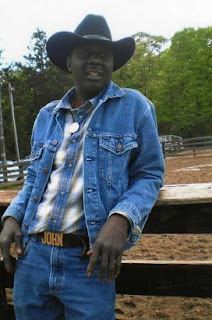 Oh man, a warm hole in my heart for southern rap’s messy appropriation of country blues phrasing. But first, a flipped bird to every kid in my 5th grade class who ever proclaimed an interest in anything but either genre and a second to the dude who coined “hick-hop”. What if Andre 3000 had hired Nashville Session players to take over for Mr. DJ (by the way, where’s his ass now? Working on the new Witchdoctor?) instead of exploring drum’n’bass interpolations of the Sound of Music? (and since I brought it up - why isn’t there a new Cool Breeze? Guy invented the Dirty South like Al Gore invented the internet).

I’m skipping over Towdown’s prototype because I can’t find my promo CD single and the video is too painful for me to watch. And I’m not changing the title of this post though I will serve up the instrumental at some point in the future. Instead, there’s 40 B-Low’s “Country Bass”.The name says it all, though if its any indication ass-shaking ain’t so different in Butts County, GA than A-T-L-A-N-T-A G-A.
Another one: The Blue Flame Click’s “Down Way” best (or only) known as the outmoded break that DJ (One-)Armed Robbery (played by Blacknmild) used to keep the party dead in Kane & Abel’s “Da Block Party”. First rate intro with second rate verses by a third rate click (at least as much as their Soundclick page suggests) from down where the “dirt is” ..uh.. “dirty”.
Trophy goes out to Big Mike, Six 2 & Young Bleed for “Down Home”, though. One of the best rolled front porch blunts since “Rosa Parks”, not to mention smoothest thug accordion ever. As of yet this release is solely available in this youtube clip. Tum-Tum’s “Deep in Da Heart of Texas” is enough of a tangent that I’m not posting the MP3, but it deserves mention A) for being so dope and B) for delivering lyrics so plausible that I’ll never remember the actual unofficial State song here parodied.
Update: Mr. DJ is living in Sherman Oaks? wtf and developing his "Camp David" label and roster. Some post-Outkast prod. credits of his include Yung Joc's "Uh Huh", Rich Boy's "RGF and I love You" and 2XL's "The Hustler's Gone".

man you spread some good knowledge here.. I never heard this young bleed verse before!

i'd be glad to see some more tum tum, i liked him on the big tuck disc and i know nothing about him..

and if you know anything about early max minelli i'd appriciate it, i was gonna do a post on him myself but as i was gonna start writing i relized i knew nothing about him haha..