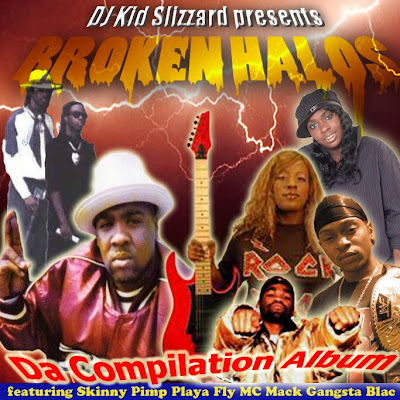 The first in what one can only hope will be an extensive T&G penetration of the Triple 6 periphery, today’s offering is the homemade Broken Halos compilation. Two discs (virtual or for real) of golden era Three 6 members or collaborators killing it on 4-track cassette in the garage, clubhouse or wherever.

The best of Paul & J’s old ass mixtapes have been shuffled and re-compiled into what is becoming a long list of Triple 6 Mafia reissues. No complaints from this author, the remastered versions sound a hell of a lot better than the tape-to-MP3-to-WMA-back-to-MP3 sloppies I have clogging up my hard drive (not to mention being just about the best music you can buy at Best Buy). But that handful is just the the tip of the Memphis iceberg. On here are solo efforts by all the 3-6 mainstays - Boo, La Chat, Pat, Lord Infamous & Koopsta Knicca - and a basket of MCs who got left behind in the race to fame or who were tangential to begin with. A cursory glance lets you know they're all young as hell - Lil Sko, Lil Ramsey, Lil Gin, Lil Fly (later Playa Fly), Lil Corb....

Completists may note the absence of Carmike, but I've never warmed to his exaggerated cartoon style and the only track I like on Comin Out Yo Azz is the instrumental. I also thought long and hard about the inclusion of 199nigga4 era Indo G & Lil Blunt, but that's really a whole different funk altogether.

COMING SOON: nonstop mixtape of unadulterated Three 6 sample material, from the Delfonics to Puppetmaster. Tracklisting in the comments section.

This is some bleak, subterranean shit.
Thanks for compiling. Keep it coming.